The Firefox Girls served as Emcees and Mistresses of Ceremonies at Prom 2012-2015, and Katsu was even voted best dancer in the Shiba Shake Video in 2012. We were thrilled to have them back to rock the house for Prom 2016! 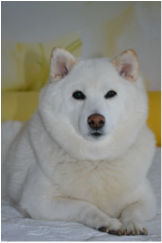 My name is Lucy Rose and am the Shiba Prom Matchmaker!  Shiba Prom is very impawtent to me because I am a rescue.  I came into rescue when I was about four years old.  I was very lucky to be rescued because I had cancer and it needed to be treated.  NYC Shiba Rescue got me the treatment I needed and I have been cancer-free ever since.   Many Shibas come into rescue with medical problems and need costly treatment.  I will work very hard to make Shiba Prom a success so that other Shibas in rescue can get what they need.
© 2023 Shiba Prom